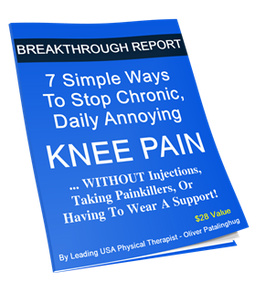 If you’re living with bad knees, they’re painful, or they ache - it’s very easy to think that it’s “just something that comes with age,” it’s a bit of “wear and tear,” or that it’s nothing and it’ll go away on its own.

You can’t quite point your finger on why you’re feeling pain in your knees - but it doesn’t seem to be getting any better!

If that’s happening to you, you’re not alone - we hear this type of thing all the time. In fact, Knee Pain is one of THE most common problems that we see in our Physical Therapy clinic.

And when it comes to living with Knee Pain, everybody we see wants to know the answers to these questions:

“Why am I still suffering from Knee pain that keeps getting worse after putting up with it for 6 months - sometimes more?”...

Most people think that when they get Knee Pain, it’ll eventually “ease off” and go away on its own. That they’ll wake up one morning and like “magic”, Knee Pain will be a thing of the past... But then 6 months later you’re still living with the discomfort of knee pain - often even worse than it was when it came on.

Another scenario we see all the time in our physical therapy clinic is when people go to their Doctors, and the well-meaning Doctor tells them to “rest”, “try these painkillers” and “come back in 6 weeks if it’s no better” - but then 6 weeks later, they end up going back to the same Doctor again because it hasn’t got any better, only to be given ANOTHER prescription of even stronger pills, and maybe knee support.

Has That Ever Happened To You?

It’s very confusing to know exactly what to do - and that’s just to avoid making knee pain worse!

And because of this confusion - this often leads people to procrastinate and put off making a decision about what to do to help fix their Knee Pain. Worse, many people just end up accepting it as “part of life” - as if it’s normal as if it “has” to be that way.

Is This How You Feel Too?

If You’re Currently Living With Knee Pain, Here’s 7 More Reasons Why It Could Be Lasting Longer Than It Should:

If any of these have happened to you - we would love to help you by inviting you to book a call to talk with one of our Physical Therapists to find out what can be done to help you.

The fact that you’ve tried any or all of these things already is actually a GOOD THING because when you know what doesn’t work - you are closer to finding the thing that does!

Click the link below to book a call with us if you would like to get some solid advice given to you for FREE over the phone. The phone call is complimentary and there is no obligation to book any appointments with us after the call is over. Our goal is to help you make the right decision about what to do next for the best.

If you would like to know how the Restore Physical Therapy team can help you live with less knee pain - we invite you to start with a completely free, no-obligation, risk-free Discovery Session:

Note: This Free Discovery Session is something that we offer to people who are very nervous or skeptical about Physical Therapy - unsure of its benefits or if it is right for them. If that sounds like you, then please start with a free discovery session so that we can work with you to find out what is wrong and what can be done - without any financial risk on your part.

So the next question is:

Here’s just a few of the things our Physical Therapy Team can do for you:

If you want to know what it costs - and what availability we have, then please just click the button below and complete the short form:

I love this place!

Oliver is awesome and worked a miracle on my back! I love his staff. It was a great place to go and check out, so when you're in pain they know how to work it out here!"

... After a few sessions, the Restore PT program way, I began to see that hard workouts would be helpful. The structure of the program allowed me to see how progress could be made.

However, the key to this successful treatment was the genuine interest in me as a patient...

I have seen much improvement in my physical and mental state. I feel much younger than my age of 85 as a result of the Restore PT program."

I was very pleased with the treatment I received at Restore Physical Therapy.

The physical therapist, Oliver, was very patient and kind. He went over and above the call of duty. His staff was very good too.

I am pain-free now. I could barely function before the therapy because of the terrible pain.

If you are considering physical therapy, I highly recommend Restore Physical Therapy. I heard about them through my physician whose patients had achieved good results."

If Your Need is Urgent... Please Call or Text This Special Number Now

For People In Their 40's, 50's, and 60's Who Want To Keep Active And Maintain Independence, Live Free From Painkillers And Avoid Risky Surgery.

Fill Out the Form to Get Your Special Report with All The Best Ways to End Knee Pain (It's Currently FREE!)

Oliver hates spam and promises to keep all of your information very safe.